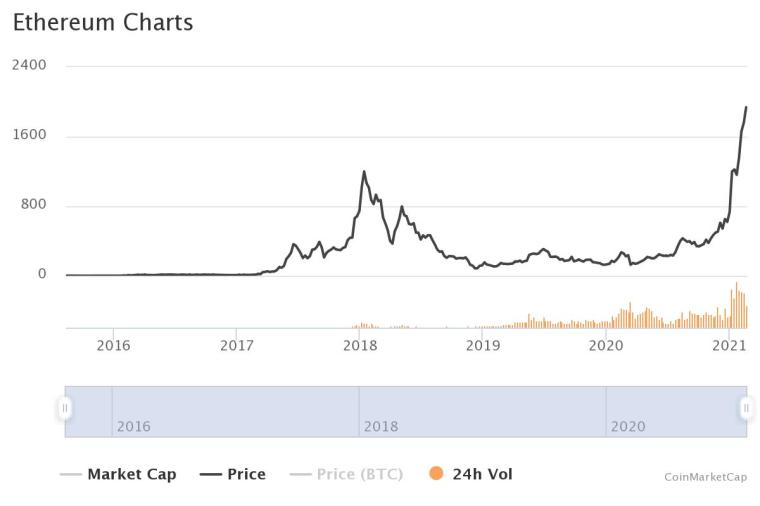 To most, Ethereum (ETH) cryptocurrency has been undervalued for a long time despite being the blockchain with the most use cases around the world. However, there are speculations that ETH may hit $2,500 as it races to assert itself as a leader in the blockchain world.

The co-founder of Aragon, Luis Cuende, was quoted saying, “Ethereum is really undervalued, and I believe it has been . . . due to its more complex narrative.”

The current bullish trend in Ethereum is purely being fueled by traders though it comes as Chicago Mercantile Exchange (CME) launched ether futures.

While a majority of corporations and investors anticipate investing in Bitcoin with some already taking that step of faith, there are still those who still feel the sudden rise in Bitcoin prices could spell doom for its investors.

One among them is the billionaire founder and CEO of DoubleLine Capital investment firm, Jeffrey Gundlach, who said in a tweet that when a lot of liquid is poured into a funnel it creates a torrent. This could be translated to mean that the sudden rise in Bitcoin prices is creating a bubble that may burst any time.

I am a long term dollar bear and gold bull but have been neutral on both for over six months. Lots of liquid poured into a funnel creates a torrent. Bitcoin maybe The Stimulus Asset. Doesn’t look like gold is.

Ethereum (ETH) however is showing a slow but steady growth that seems more long-lasting and determined compared to that of Bitcoin. And because Bitcoin was once below $5,000 less than a year ago, it is also very possible for Ethereum (ETH) to reach the same price levels as Bitcoin. In cryptocurrencies nothing is impossible! In 2018-2019, whoever thought that a cryptocurrency would ever be worth over $50,000?