Skip to content
Is Bitcoin Price Too High? Here are 5 Other Cryptocurrencies with Potential for Growth In 2021
cryptocurrency

Is Bitcoin Price Too High? Here are 5 Other Cryptocurrencies with Potential for Growth In 2021

Bitcoin Price smashed $51,000 as the cryptocurrency continued on its monster bullish trend unleashed after several companies invested in it with the latest being Tesla Inc. At that price most […]

Bitcoin Price smashed $51,000 as the cryptocurrency continued on its monster bullish trend unleashed after several companies invested in it with the latest being Tesla Inc. At that price most crypto investors may find it too expensive to purchase although the digital currency has lots of prospects to move even higher.

In this article, we shall explore alternative cryptocurrencies that have also shown signs of making huge strides in 2021.

Bitcoin Cash (BCH) forked from Bitcoin blockchain siting issues with scalability. BCH market price trend is known to closely mirror that of Bitcoin (BTC) although the BTC price is by far above that of BCH.

Currently, BCH price is slightly above $713 making it a less costly alternative compared to BTC to invest in. If you purchased BCH today for example and the coin reached its all-time high of $3,785.82, you would end up making over $3,072 for every BCH coin.

Polkadot is another blockchain whose cryptocurrency is making headlines in the way its value is gathering momentum. The blockchain was created by Gavin Wood a co-founder of Ethereum blockchain. Its first token sale was conducted in 2017 and it was first listed for trading in August 2020 at $2.861922. 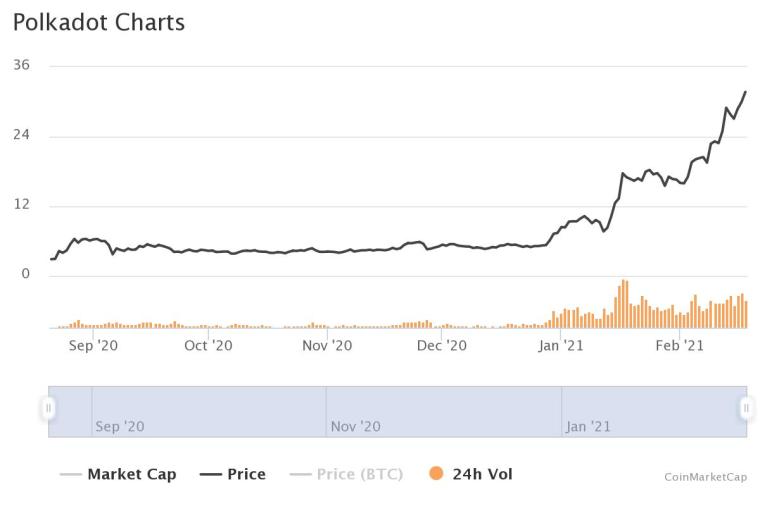 Today, a single DOT coin is worth $31.73. And although this is not much compared to BTC price, it is a good price for an investor looking for a promising crypto coin to invest in.

Ethereum blockchain, the mother of all altcoins and the main challenger of Bitcoin and its forks, is another blockchain whose cryptocurrency investors should keep a close eye on.

It may be argued that Bitcoin’s price is currently skyrocketing because of the many corporations investing in it. However, it should be noted that Bitcoin is only used for payments and the companies that are investing in it are eyeing it as an investment or for payment. Ethereum, on the other hand, has produced so many blockchain use cases that have been adopted in different sectors around the world especially due to the smart contract technology that has made it possible for developers to develop Decentralized Applications (DApps).

And while it took long for Ether (ETH) to revisit its previous all-time high of $1,290, the cryptocurrency is currently on a promising bullish trend and it could be a matter of time before we start seeing a monster rally like that of Bitcoin.

Also, its current price of $1,839 is a good price for investors looking for a cheaper option than Bitcoin yet with great prospects of growing.

Binance Coin (BNB), which is a cryptocurrency developed on Ethereum blockchain for use on Binance exchange for paying fees, is another digital currency that is currently showing very great prospects of making great strides.

The crypto coin was unveiled in July 2017and it is one of the few cryptocurrencies that were able to get up from the 2018 retracement after the 2017 Bull Run. Since its introduction, the coin’s price has been on a relentless rise.

But it is the monster skyrocketing that started in January 2020 and continuing that has caught the attention of investors. If the trend continues till February 29, which is only 12 days to go, the coin will have maintained an unbelievable sharp rise for a month. 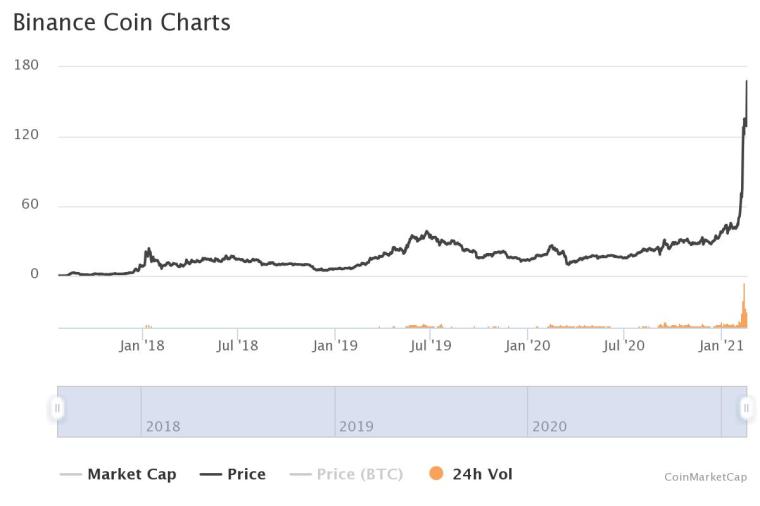 The coin is worth slightly over $171, which is a great price for investors looking for a crypto coin to invest in before it becomes too expensive to purchase.

The last coin on our list is LiteCoin (LTC), which is Litecoin blockchain cryptocurrency.

Litecoin blockchain is a fork of Bitcoin and it is very identical to Bitcoin and it is was created to be used as a peer to peer cryptocurrency making LTC sole purpose to be making payments and being an investment asset.

Although the crypto coin is yet to revisit its 2017 all-time high, its current bullish trend is a pointer that it is only a matter of time before it gets back there and even surpasses it. If an investor purchased it at its current price of $226, he or she would stand greater chances of making more profit if it were to sustain the bullish trend.